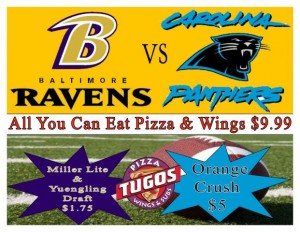 Head on over to Pizza Tugos in West Ocean City to enjoy the Baltimore Ravens take on the Carolina Panthers on Thursday Night Preseason Football at The Taproom! We are the 2013 Headquarters for NFL Football games in Ocean City! Plenty of HD TV’s strategically placed throughout our establishment for your viewing pleasure, seating for over 300 people and a game room for the kids.