Jump Start Your Weekend at Pizza Tugos with Firkin Fridays! 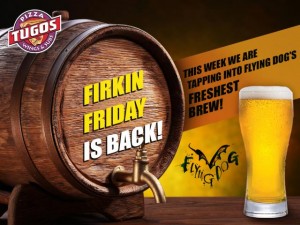 Forget TGIF, we’re talking TGIFF – Thank God it’s Firkin Friday! On tap this week is Flying Dog’s Imperial Pumpkin Ale, ‘The Fear’. But first, let’s get back to the basics – what is a firkin you ask? Simply stated, it’s a mini barrel of beer. More specifically, the firkin is a small barrel (10.5 gallons) that is one-fourth the size of a regular barrel of beer. So you’re probably thinking…why would I want smaller beer barrels?? Well for starters, the smaller sized barrel is ideal for cask conditioning, yielding naturally fermented and carbonated beer in a small batch. We won’t bore you with the exact details, but ales that are housed in the firkin are naturally carbonated by its resident yeast, with ingredients that have not been processed in any way outside of the fermentation via yeast. The result is some seriously delicious beer. But don’t take our word for it, head in to the Tap Room at Tugos this Friday starting at 6pm and try for yourself. ‘The Fear’ is brewed with pumpkin puree and a secret blend of spices, including Goldschager soaked oat chips… perfect for kicking off your weekend.

And since we’re talking weekend plans, we would be remiss if we didn’t mention this week’s NFL lineup. You know the drill; All-You-Can-Eat pizza and wings for $9.99 during any of the NFL games, ample flat-screened TV’s, and a full bar, menu and beer selection. This week’s game schedule is looking fierce: