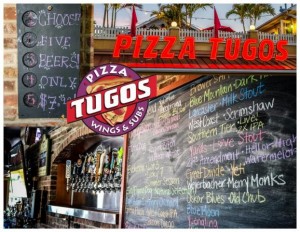 With 54 craft beers on tap, Pizza Tugos Taproom is the easy choice for locals and vacationers in Ocean City Maryland when it comes to great tasting draft beer! We serve craft beers carefully selected by Mr. Tugo himself from all over the United States and the selection changes weekly! We are the home to the Pizza Tugos Taproom Beer Flight, where you pick 5 beers to try and its only $7.99!

Stop in and check out our various NFL Specials such as all you can eat pizza and wings for only $9.99